Special consideration continued to be given to applications from Early Stage R01 Investigators[3]; as a result, all applications in this group with scores up to and including the 15th percentile were funded. An additional 7 meritorious ESI applications were selected for funding beyond the 15th percentile. Beginning in fiscal year 2017 NCI further elevated priorities for supporting the next generation of talented cancer researchers by converting R01 ESI applications that fell within the payline into MERIT R37 awards for an additional 2 years of support beyond the initial award period.

NCI also funded applications with scores beyond the payline after review and approval by NCI's Divisions and Scientific Program Leaders during special meetings with the NCI Director. The graphs that appear below summarize the overall funding patterns for R01s and R21s across various categories of investigators.

The R35 Outstanding Investigator Award (OIA) supports investigators with outstanding records of productivity in cancer research by providing extended funding stability for projects of unusual potential. OIA recipients are required to commit at least 50% effort to the OIA research. NCI will only consider funding two additional research project grants to the Outstanding Investigator while the OIA is active. This limit includes single PD/PI, multiple PD/PI, and multi-project grants.

Also beginning in fiscal year 2017, the NCI supported The Cancer MoonshotSM to accelerate scientific discovery in cancer, foster greater collaboration, and improve the sharing of data. The figures and displays represented include Cancer MoonshotSM.

The graph in Figure 1 summarizes the number of percentiled R01 applications received and grants funded at each percentile, among all investigators. As expected, beyond the 10th percentile, the number of grants funded decreased in proportion to the percentile ranking. Nevertheless, 15% of these awards had rankings beyond the 10th percentile.
Similar displays are shown below for experienced investigators (applicants who have received a prior R01 award and were applying for a new grant or a competitive renewal; Figure 2); new investigators[3] (Figure 3); and early stage investigators[3] (Figure 4). Similar patterns are observed in all cases. Success rates have not been plotted for new and early stage investigators because of the small numbers of applications at each percentile score. For Success Rate comparisons, refer to Tables 1 and 2 below.
Funding Patterns in previous years are posted at: https://gsspubssl.nci.nih.gov/blog/articles.
[1] The success rate is the percentage of applications received that are funded. It is calculated by dividing the number of funded grants by the number of applications received. When an amended application is considered in the same fiscal year as the original, only the application with the better score is counted in the number of applications received.
[2] A percentile is a score that ranks competing applications against others in the same study section in the past year. It is intended to allow a comparison of impact scores[4] of applications across all study sections.
[3] The New Investigator is one who has not previously competed successfully for an R01 or other substantial NIH independent research award. An Early Stage Investigator is a New Investigator who is within 10 years of completing his/her terminal research degree or medical residency (or the equivalent). A more detailed definition can be found at: https://grants.nih.gov/policy/new_investigators/index.htm#definition.
[4] The impact score is given by each individual scientific reviewer's assessment of the scored criteria plus additional criteria regarding the protection and inclusion of human subjects; vertebrate animal care and welfare; biohazards, and criteria specific to the funding opportunity and is based on the overall impact that the project is likely to have on the research field(s) involved.
[5] An unsolicited application is an investigator initiated application and is not an application in response to an RFA.
NCI FY2020: "Percentiled" R01 Applications, Awards and Success Rates
Figure 1: All Investigators: Experienced, New and Early Stage 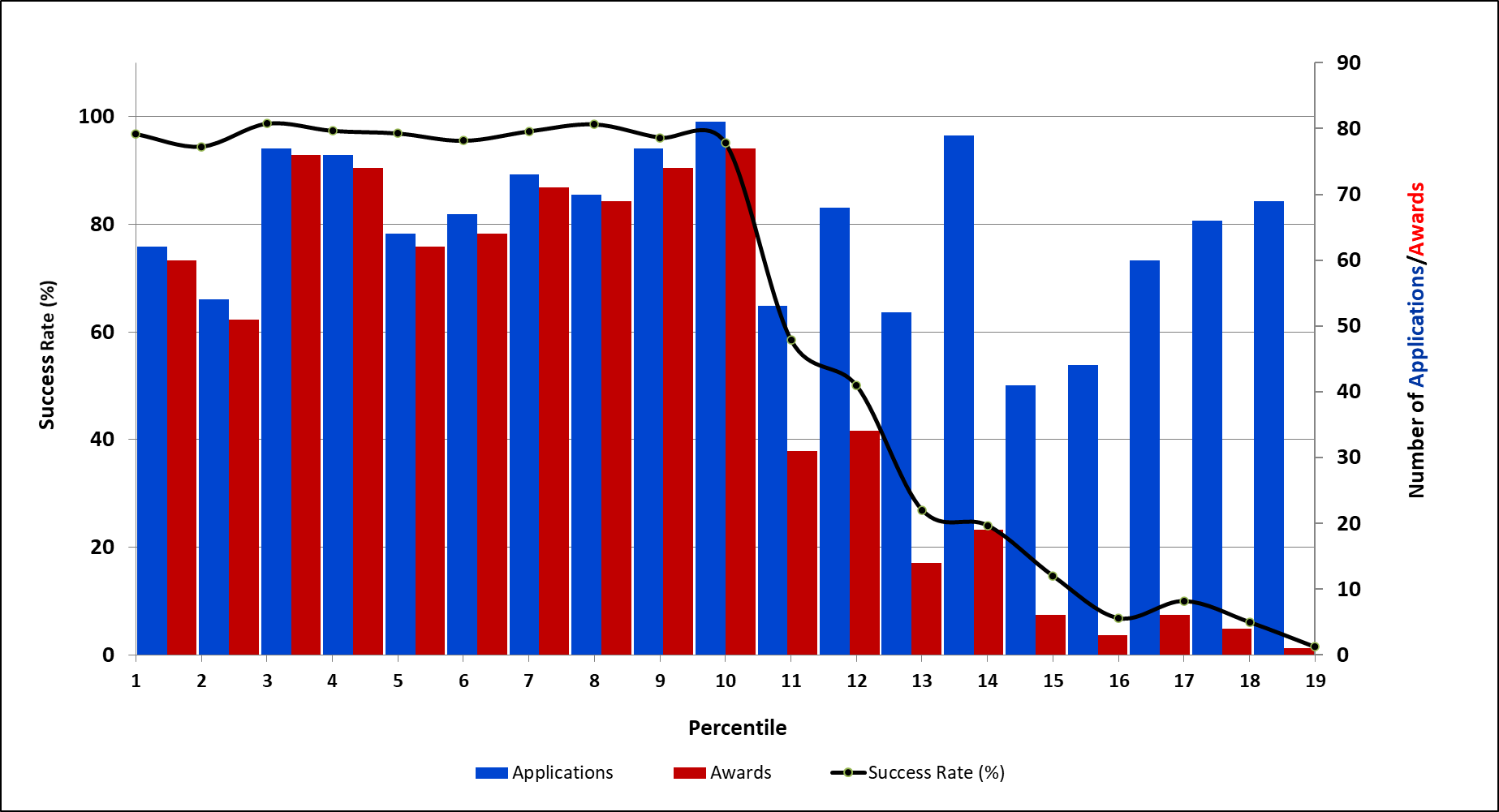 Figure 1: In some cases, applications scoring within the payline were determined ineligible for funding due to overlap.
Figure 2: Experienced Investigators 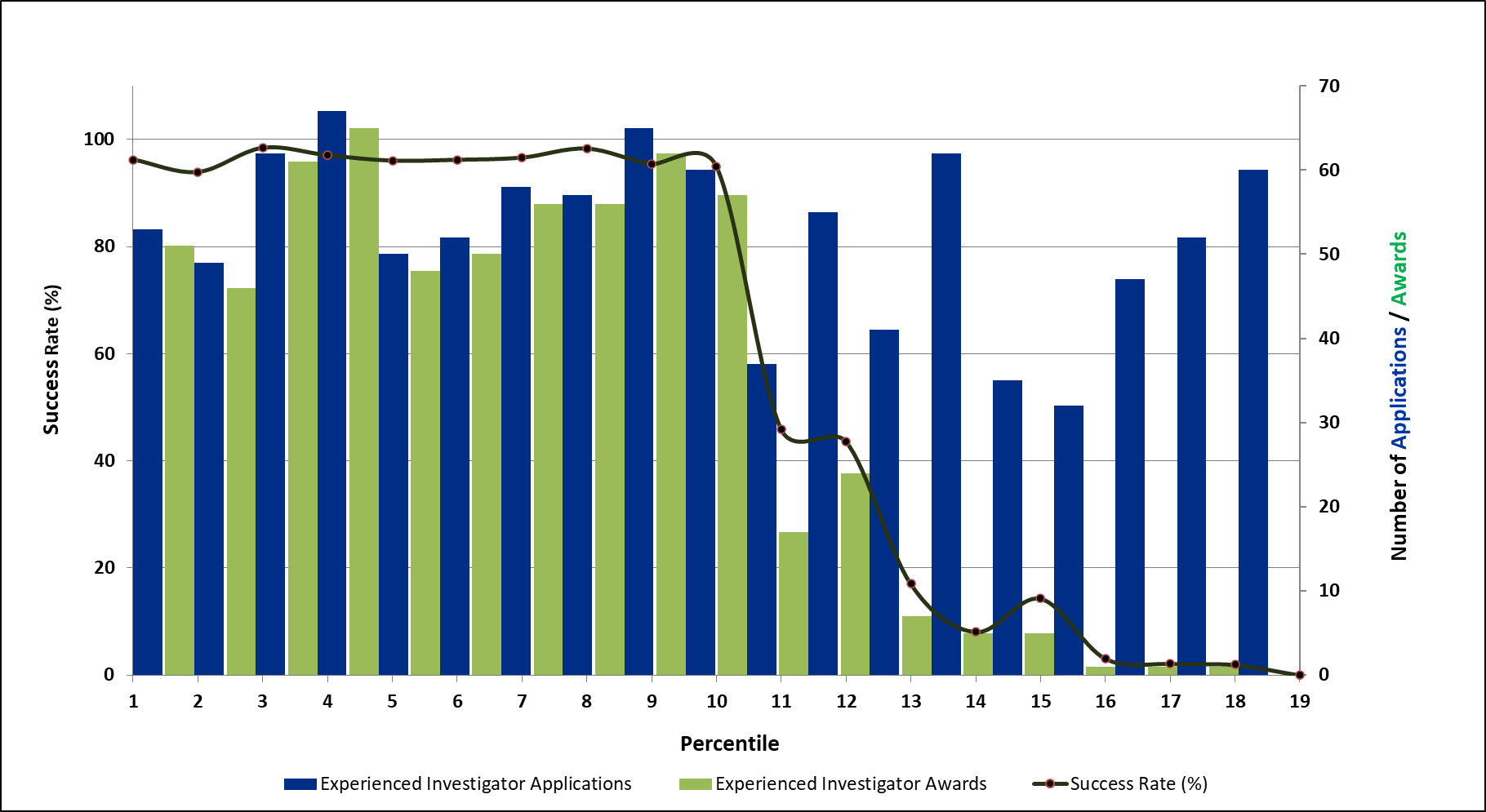 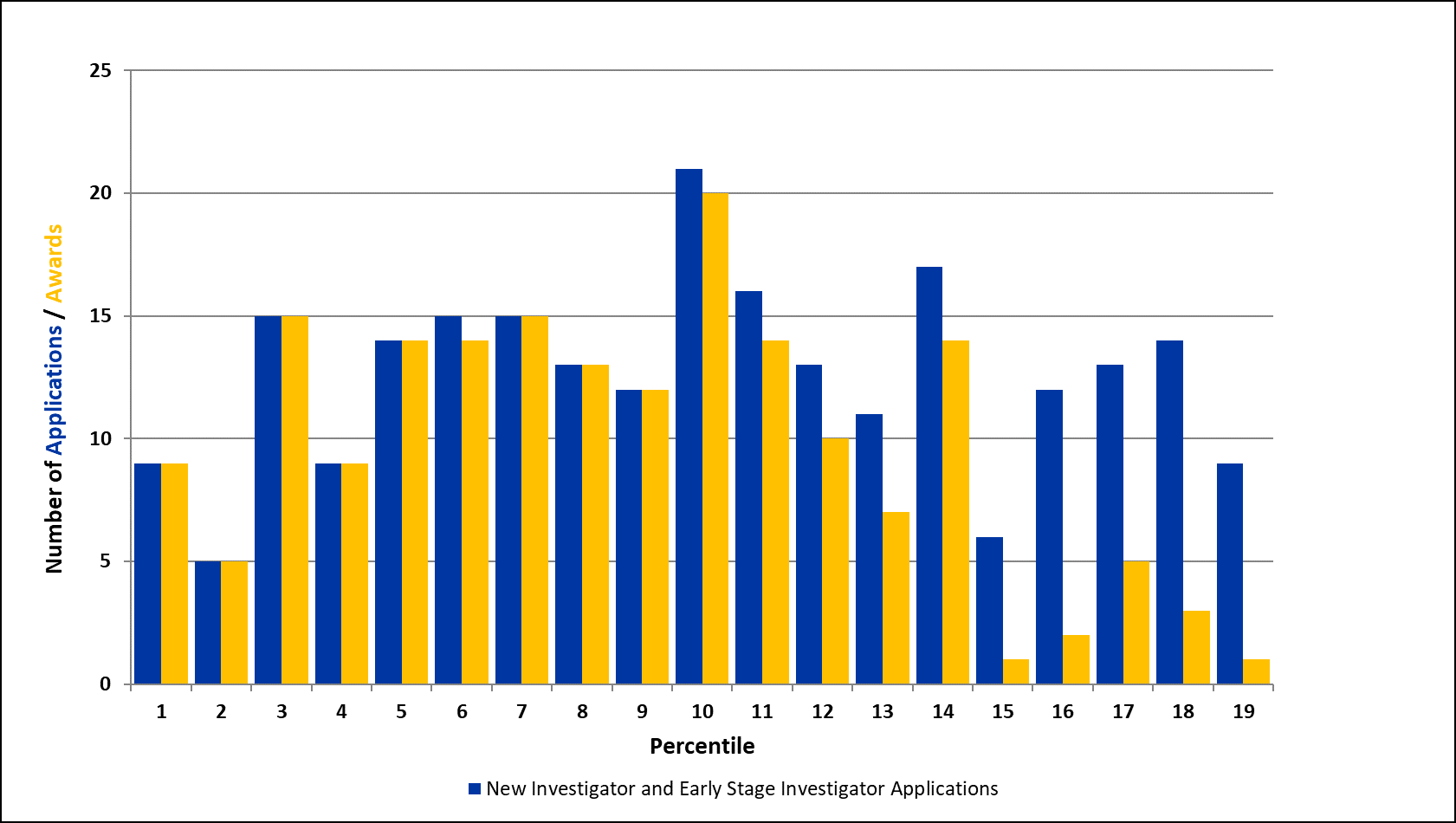 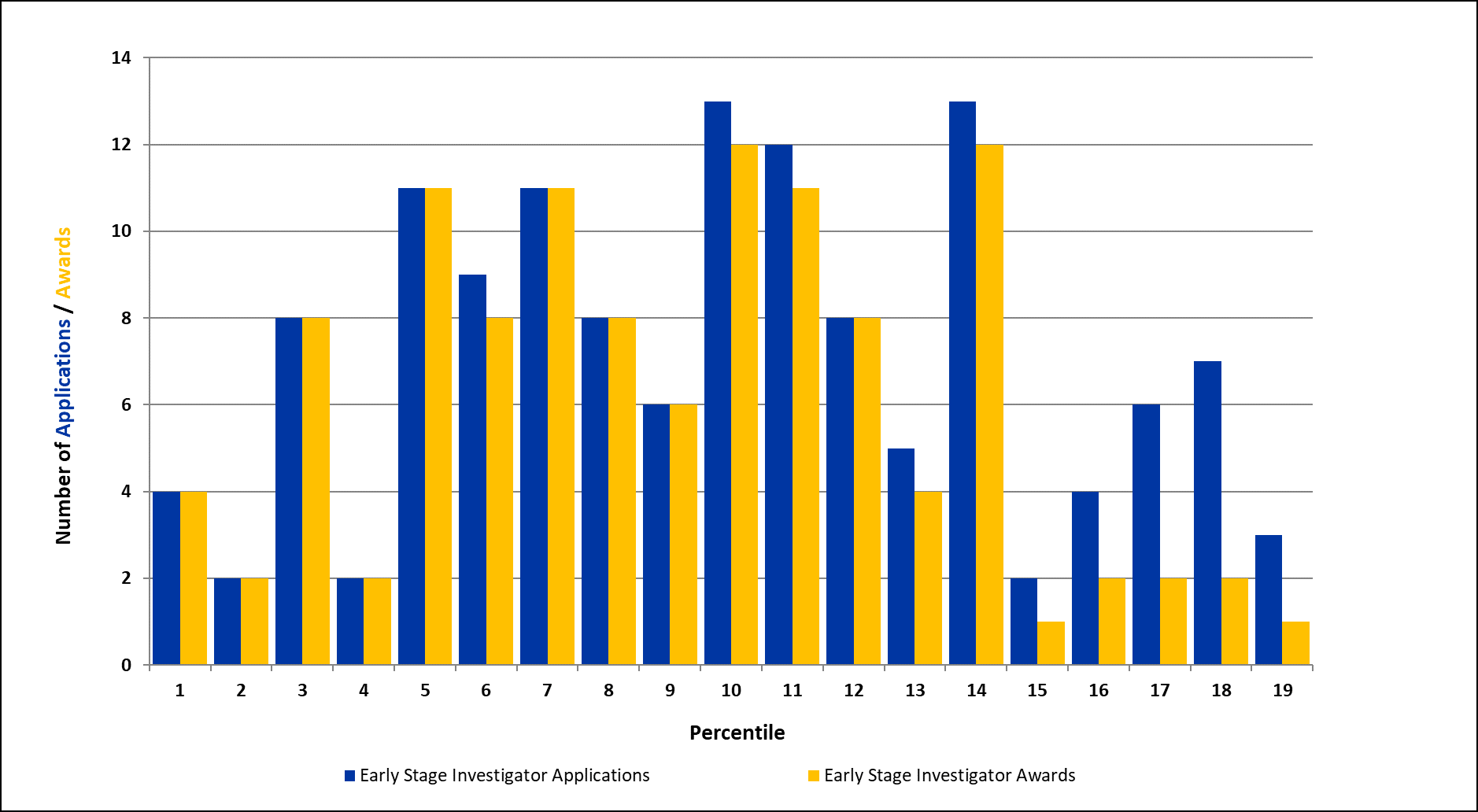 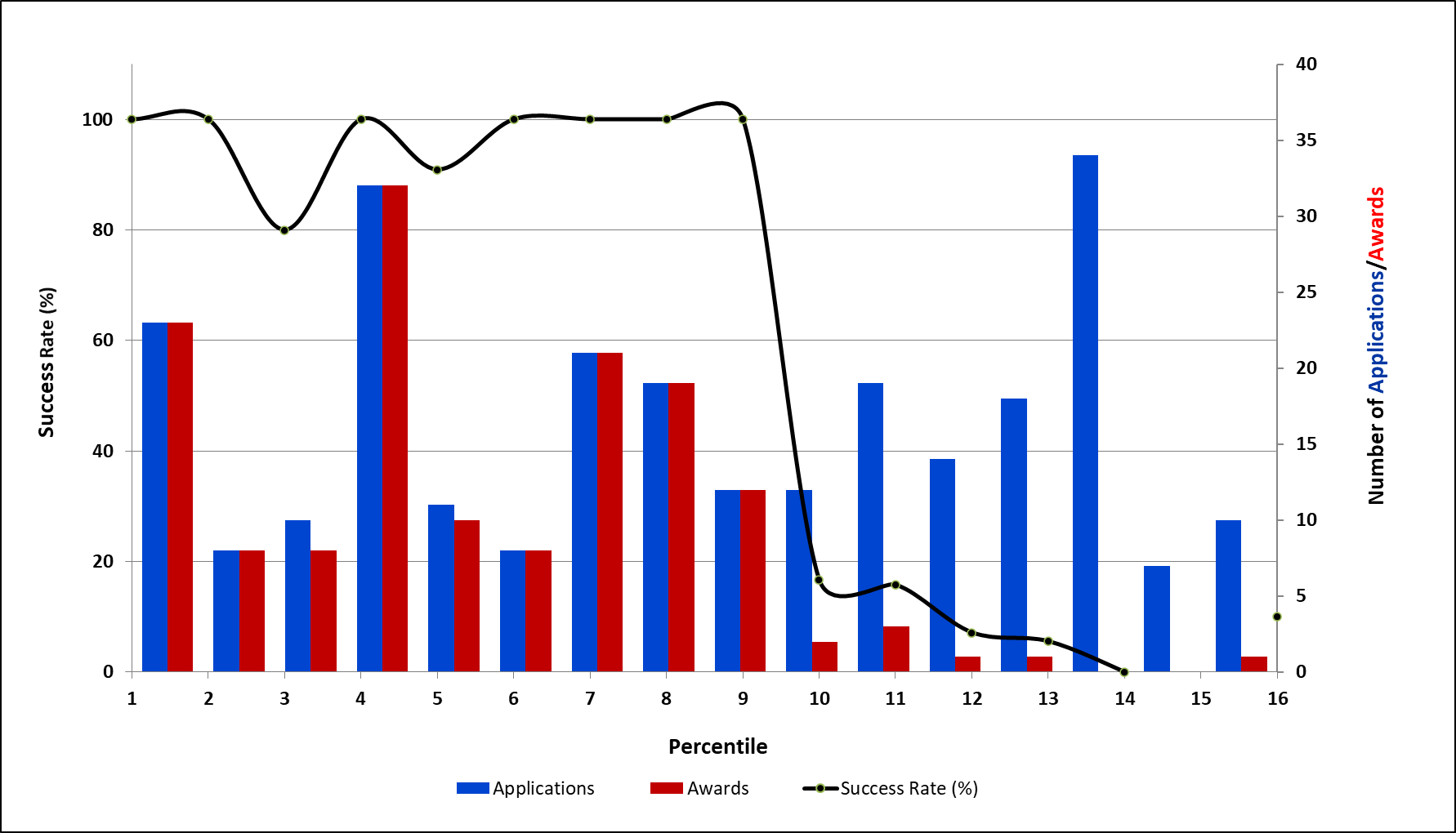 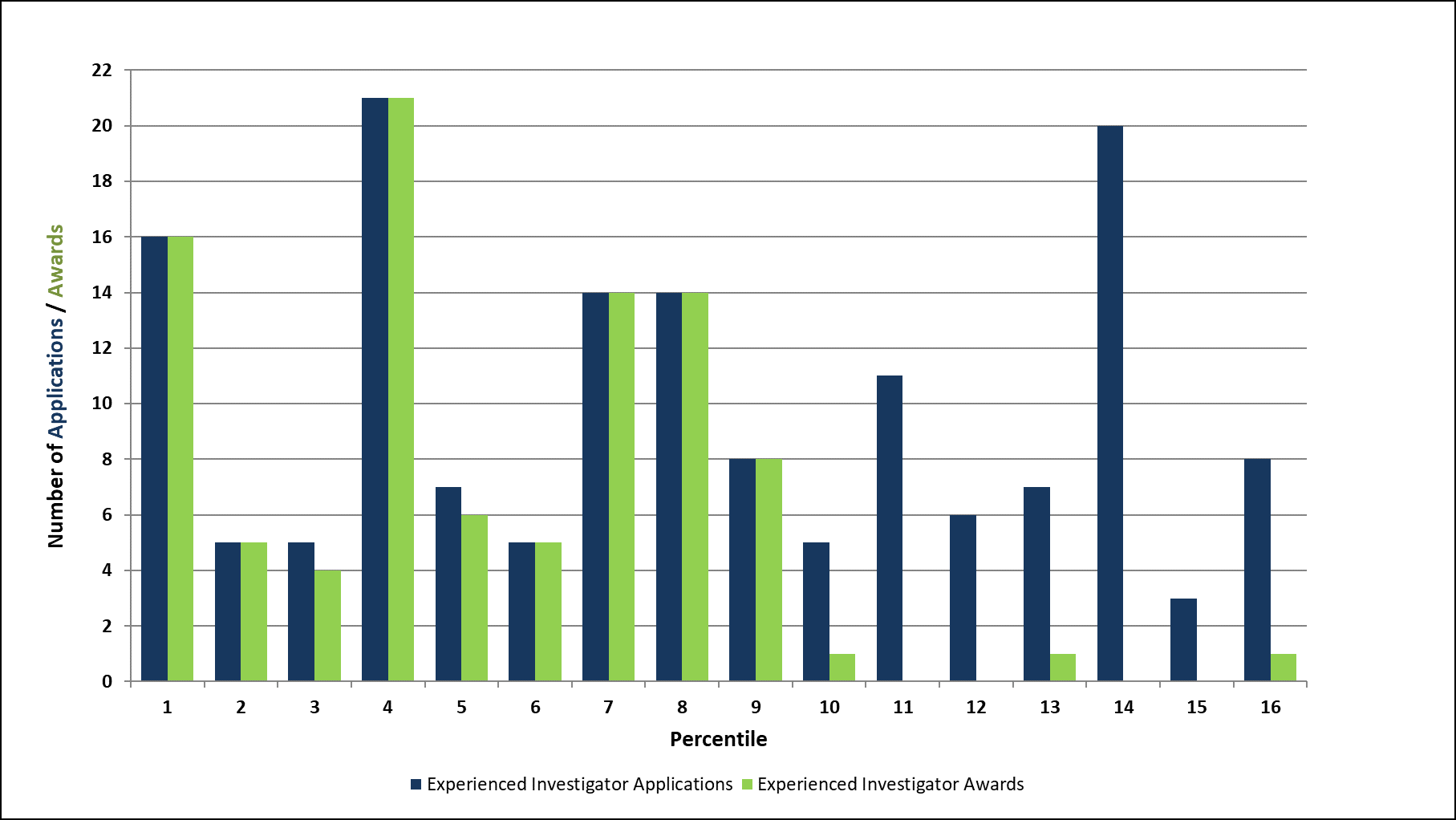 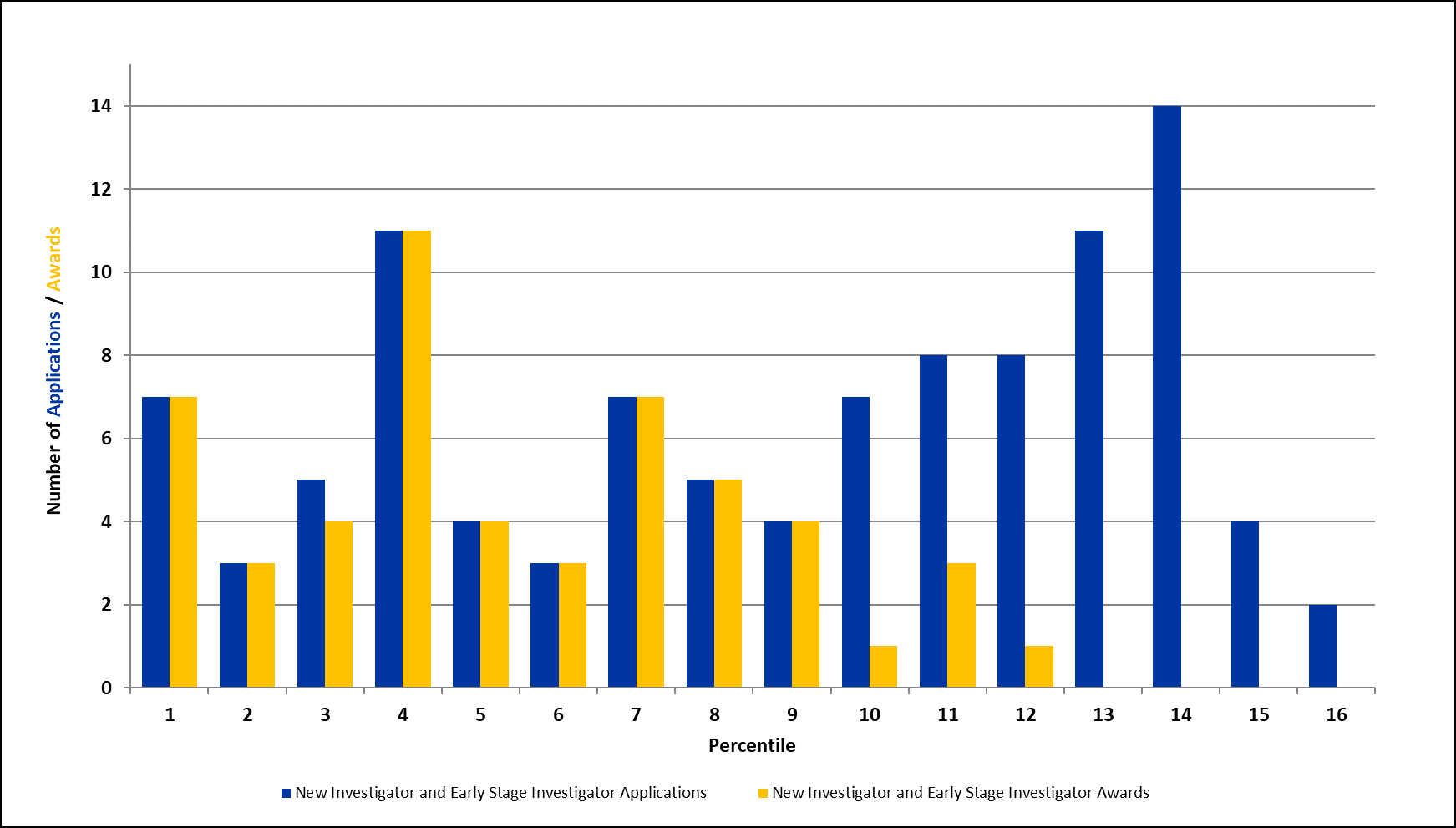 NCI applied the same R01 criteria to identify new and early stage investigators. For Success Rate comparisons, refer to Tables 1 and 2 below.
Figures 5-8: Excludes applications that did not receive a percentile ranking. When an amended application is considered in the same fiscal year as the original, only the one with the better ranking is counted.
Table 1: Fiscal Year 2020: Success Rates (unsolicited R01s, R37s and R21s)
Includes Cancer MoonshotSM
Total new and competing renewal applications include those that received either a percentile, an impact score, as well as those that were not discussed (triaged) or were not recommended for funding.
Funded R01s include competing revisions. In FY2020 57 R01s were converted to R37s.
1 Includes Early Stage Investigators
2 Included in New Investigators
The NIH does not report the R21 grants in terms of experienced and new investigators; NCI applied R01 criteria to identify those parameters.
Table 2: All Competing Research Project Grants
Includes Cancer MoonshotSM
1 Funded R01s include competing revisions. In FY2020 57 R01s were converted to R37s.
2The Provocative Questions (PQ) RFA did not compete in FY2020.
3 Other RFAs include UM1, R33, P01, U01, UH2, and UG3.
4 Other RPGs include DP2, P01, R15, R56, U01, U19, UH2, UH3, UM1, and UG3.
Funding Patterns for other years are posted at: https://gsspubssl.nci.nih.gov/blog/articles.